I remember being shocked by the ending of Rocky.

That this shy, courageous, kind-hearted boxer would lose the fight had not even occurred to me. I’d seen the poster, maybe the trailer too. I’d figured, It’ll be a close fight, maybe he’ll get knocked down. But for him to lose? After we’d just spent two hours watching him train? Running up and down the steps, eating all the raw eggs? After we’d just spent two hours FALLING IN LOVE WITH THE MAN?

I thought about the movie for days. I used my precious record-buying money to go out and buy the soundtrack. The film had been so powerful, I wanted to see if some of that spirit lived in the music, too.

Rocky was one of my first encounters with the idea that a person could be brave, noble, and heroic … and still lose.

In my mind I connected the boxer in the movie with my brother Ken, nine years older than I was, and my personal hero. He too was the strong, silent type — big heart, sensitive nature. After the movie, I took a second look at him. I was horrified at the idea that life might turn out wrong for him. A tragic viewpoint slipped into my consciousness.

This week I was looking back and trying to determine when I first fell in love with country music. On the surface, I guess the answer is Victorville, Calif., in 1990. But I wonder, was it actually 14 years earlier, when Rocky lost?

My friend Haroula Rose gave me a beautiful gift a few days ago. She told me to check out the music of Lori McKenna. How this particular songwriter had escaped me till now, I have no idea.

McKenna, a native of Stoughton, Mass., was a late bloomer, career wise. She married her high school sweetheart and raised five kids before finding her calling — writing and performing songs about the passing of time, the fading of love, the aching goodbye to children who have grown up and are ready to move on.

One of my favorite songs is “People Get Old.” But there are forty more like it, and I’ve just begun the exploration.

McKenna is from a working-class Boston suburb, not typically fertile ground for country artists.

Another example of wrong-zipcode country artist is the late Steve Goodman, a middle-class Jewish kid from the Chicago suburbs who wrote “City of New Orleans” and “You Never Even Called Me by My Name.”

Country music isn’t where you live, clearly. It’s your take on life, especially the low moments, or at least the bittersweet ones. The take can be humorous, like George Strait’s “You Know Me Better Than That;” or defiant, like Travis Tritt’s “Here’s a Quarter (Call Someone Who Cares);” or wistful, like Miranda Lambert’s “The House That Built Me.” It can be misery-soaked, like the Webb Pierce classic “There Stands the Glass,” or heartbreakingly generous, like Dolly Parton’s “I Will Always Love You.” A great song may traverse several of these attitudes.

Of course, “country” is itself a problematic term. A fan once tried to pin down Kris Kristofferson on the genre of “Me and Bobby McGee.” The tune had elements of folk, rock, and blues, but it also sounded almost … country?

Kristofferson told the fan to trust his gut.

If it sounds country, man, that’s what it is. It’s a country song.

Folk, country, Americana … who cares what label we slap on the song? The more important question is, does the song drill down into your soul? Does it lodge there? Does it keep you company? Does it color the way you see the world, the way you experience a place, a relationship, a surge of emotion? Can it conjure a surge of emotion? Can the song make you feel both awful and exhilarated at the same time?

Lori McKenna’s songs do that for me. Already they do, just a few days in.

So does Bruce Springsteen’s “One Step Up,” and Mick Jagger’s “Evening Gown,” and John Prine’s “Angel From Montgomery.”

And so did the movie Rocky, back in 1976. The ending was harsh medicine, for a fourth-grader. But it primed me, it tuned me to a signal I would pick up again years later from Johnny Cash, George Jones, Dolly Parton, and Willie Nelson.

For Spotify users, here’s a short list of McKenna tunes to check out.

And here’s a playlist with the other tunes mentioned above. 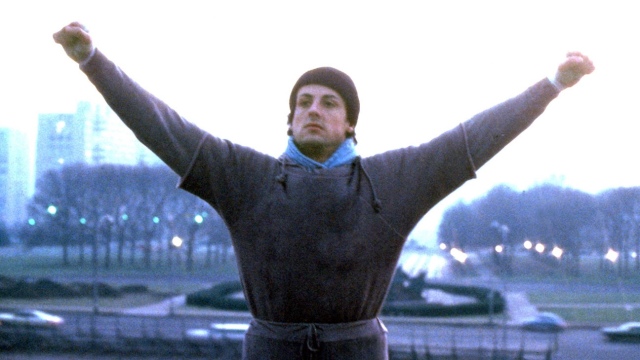 Kit Troyer lives in Los Angeles. He worked previously as a newspaper reporter and a criminal defense attorney. For the last 15 years, he has been a stay-at-home dad. But that gig is running out. Kids will soon be moving out and moving on.
View all posts by Kit Troyer →
This entry was posted in MOVIES, MUSIC, MY CHILDHOOD. Bookmark the permalink.