There’s a scene in the old hockey movie Slapshot where an opponent talks trash about the Chiefs’ aging player-captain Paul Newman.

One of Newman’s teammates, Dave, is outraged. He drops his stick and attacks the opponent. A bloody brawl ensues.

In the lockerroom between periods, as Dave’s mangled face is being stitched up by someone who does not appear to have medical training, Newman tries to rouse the troops by citing Dave’s bravery.

At least one player is amped, ready to jump on the bandwagon. He screams out, “Dave’s a killer!”

It’s one of many funny moments in an underappreciated movie. It also reminds me of my own simultaneously worshipful and horrified reaction as a 6-year-old boy watching the on-ice struggles of the hapless new ice hockey team in Washington D.C. in 1974.

Hockey was totally foreign to me, and then one day, it was everything to me.

That first-year version of the Washington Capitals still holds the all-time record for the worst season in NHL history. The team won eight out of 80 games that year, for a sublimely atrocious winning percentage of .131.

It’s not just the worst record in NHL history, it’s easily the worst in NHL history. As head coach Jim Anderson memorably put it, “I’d rather find out my wife was cheating on me than keep losing like this.”

Honestly, she probably was. It was that kind of season. Just mind-bending mediocrity, start to finish.

To add injury to insult, when my father and older siblings took me to games, the Capitals not only got thrashed on the scoreboard, they also got the living shit kicked out of them by stronger, younger, nastier opponents like the Philadelphia Flyers.

Just to set the stage further, this was back when: a) players were not wearing helmets, so you could see their bleeding faces perfectly; and b) for a modest price, my family could split season tickets with another family and sit 15 rows from the ice. I saw and heard everything.

For a sheltered, sensitive 6-year-old whose idea of sports was rec soccer and orange slices, it was jarring suddenly to witness actual, gory, profane, gladiatorial combat. I could hear players screaming at each other. I could hear them discussing subjects not strictly hockey-related, such as each other’s girlfriends.

And they were shouting with weird accents, too.

What was going on? What was with the accents?

Hockey taught me there was a country called Canada.

Hockey was teaching me so much that first season! As my weary first-grade teacher told my mother the next spring, “I didn’t realize we would all learn so much about ice hockey this year.”

I think every single one of my show-and-tells that year was about the Capitals. Poor Miss Finney. Like my classmates, she sat through weekly, breathless, jumbled accounts of how the Capitals probably, almost certainly, would start winning soon, how they got ripped off in the last game, how the player who got three teeth punched out of his mouth had not missed ANY action, had simply HANDED THE TEETH TO A MAN ON THE BENCH, I SAW IT, NO I DON’T KNOW WHAT THEY DID WITH THE TEETH, BUT LISTEN … THE GUY KEPT PLAYING!!

To add still more layers to the insanity unfolding in my young brain, when the Philadelphia Flyers would come to town for their regular thrashing of my idols, it wasn’t just Flyers players who would show up.

Five to six busloads of Flyers fans would arrive too.

The nausea I always felt before games, out of nervousness for my heroes, tripled when I saw the Philly buses in the Capital Centre parking lot.

Our team was called the “Washington” Capitals, but games were played in Landover, Maryland. This anomaly too was covered in my obsessive, weekly show-and-tell presentations. “WE DIDN’T GET HOME FROM THE GAME UNTIL AFTER 11PM!”

I’m sure Miss Finney was thrilled, or at least mildly interested, to learn why every 10 days or so, I was an exhausted, jittery, strung-out mess at school.

Five busloads of Philadelphia fans could take over our entire arena. Flyers fans were loud, obnoxious, frequently drunk. So my favorite team wasn’t just losing the game badly and getting physically mauled in the process; now I, along with my fellow inaugural Caps fans, were being terrorized by the raucous Philly hordes.

It was a toxic, bloody, terrifying mess.

It was also glorious.

Even though I could only dream of one day playing ice hockey myself, I was already having recurrent anxiety dreams that I did play the sport.

The dream was always the same. I was in the lockerroom, I was late for a game. I was suiting up as quickly as I could. I realized a key piece of gear was missing. I heard goals being scored, I heard the crowd cheering, I heard the game PASSING ME BY. Where were my skate laces??

People, I still have this dream, as a 51-year-old man. 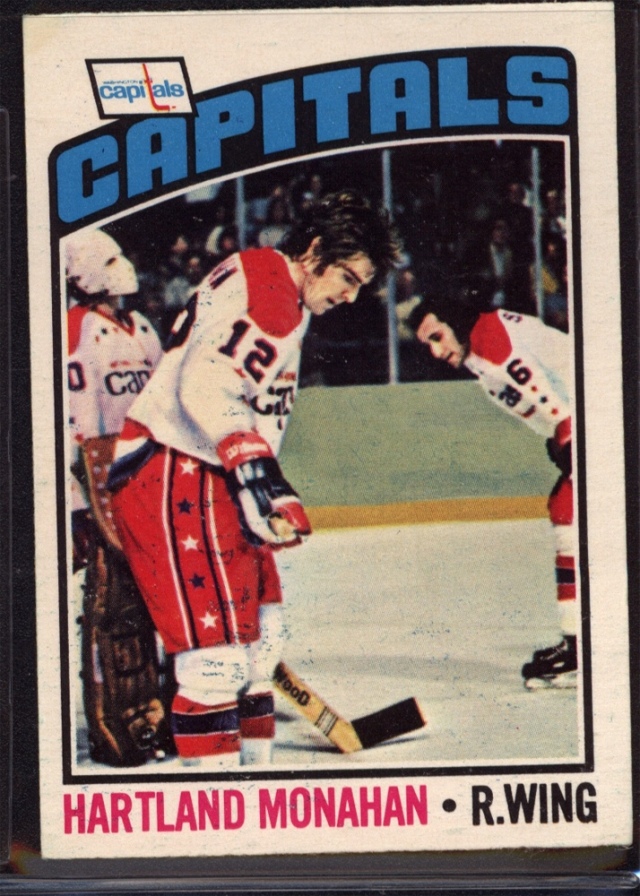 Oh god bless you, Hartland Monahan, wherever the hell you are now

I was an anxious, intelligent child. I had already, at the age of 3, undergone my own bloody mess by accidentally running through a glass door at home and nearly dying on the carpet right in front of my horrified mother.

In some ways, the accident shaped me. It made me more fearful, more risk-averse. It made me a miniature adult, always evaluating the chances of unforeseen disaster.

In hockey players, though, I saw a different possibility.

I saw a different way of living.

I saw men getting badly cut, losing teeth, bleeding all over their jerseys, and … not giving one single fuck.

If anything, bleeding just made these warriors angry. It made them want to get BACK on the ice to fuck someone up, ideally the person who had caused the injury, but not necessarily so.

Of course, that scenario — a Capital returning to the ice to fuck someone up — never actually happened that first season. A few would try. But generally, it was a series of “Dave’s a mess” scenarios. Lots of stiches between periods, lots of captain trying to rally teammates. Often the Capitals — and probably their opponents, given the lopsided scores — were drinking beer by the second intermission.

But it didn’t matter to me that the Capitals sucked.

It didn’t matter they were getting thrashed and humiliated.

It didn’t matter we fans were being taunted and drowned out.

In the same way that people sometimes look back to a certain idea, event, or experience which woke them up and made them feel intensely alive — that’s what hockey did for me. It told me there was different way of being in the world, there was a model of courage and not-giving-a-fuck-ness which must surely be available in other situations, in other careers, even careers which didn’t involve losing teeth.

Not that I adopted a don’t-give-a-fuck posture. Not that I personally became any less risk-averse. It would take me years to sort everything out. But in the meantime, going to Landover, Maryland, on a school night in my dad’s blue Oldsmobile Omega, that was the portal to a bigger, more exciting world.

Even the nasty, low-rent, smoke-filled Caps Centre arena was fascinating to me. Yes, it smelled bad. Yes, it was sometimes scary (brawling not limited to the ice). Frequently it was funny. (Profanity could be voiced in amazingly inventive ways!) But overall, the place was just radically different from my own world, from my fancy neighborhood, from my sheltered experience as the child of a Harvard-educated tax attorney. To me, the skanky Caps Centre was, I don’t know — it was Dickens’s London, it was … the rest of the world.

I counted the days till the next home game. I obsessed about the opponent. I obsessed over the opposing team’s logo. What did their logo mean? Could I glean anything about how good the team was from the symbol on their jersey? The symbol was also shown on the tickets, which were all rubber-banded together in a neat little stack in my father’s top dresser drawer.

I would sneak into my parents’ bedroom, secretly remove the ticket bundle and just, I don’t know — stare at the tickets, study team logos, try to divine whether this next game might be one where I finally saw the home team prevail.

I obsessed over every detail that first season. I studied stats, injury reports. Would Ron Lalonde and Pete Laframboise be able to play the next game? Was Yvon Labre’s thumb healed yet? And why could none of these players say the word “thumb” correctly? Why did they all say “tum?”

Canada! It all tied back to Canada!

Make a list. Get ready for next show-and-tell. There’s so much to explain! (Bring map?) 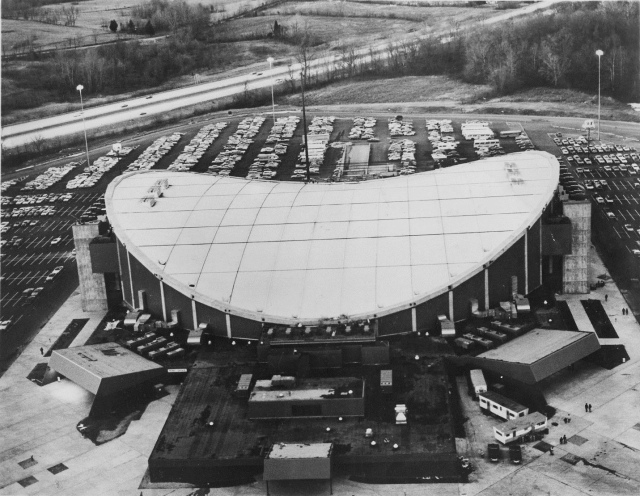 There’s another wonderful moment in Slapshot.

A goalie with the thickest French-Canadian accent imaginable tries to explain the basics of ice hockey to a local newscaster for a segment meant to boost attendance. The interview is a beautiful trainwreck. And again, there’s a genius, deadpan punchline.

Good seats were available all season long at the Capital Centre in 1974-75. 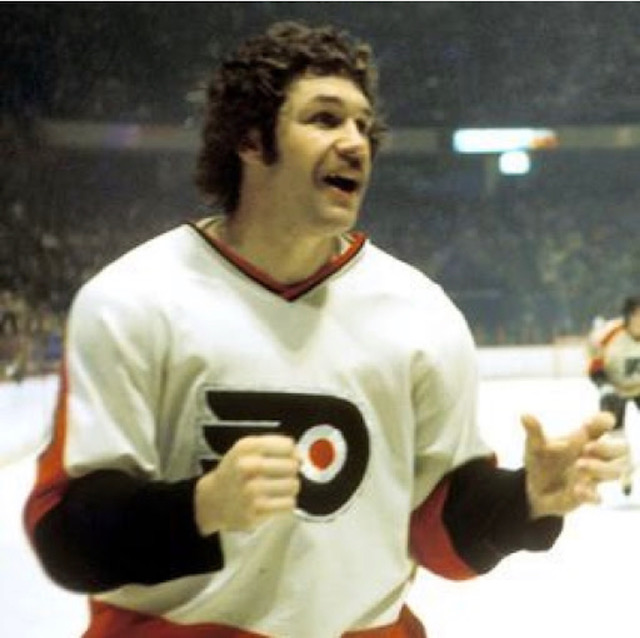 Dave “The Hammer” Schultz struck dread in my 6-year-old mortal soul. When the man retired years later, the Flyers gave him the penalty box – the actual goddamned penalty box – where he spent so much of the 1974-75 season. I do not wish this man well.

Kit Troyer lives in Los Angeles. He worked previously as a newspaper reporter and a criminal defense attorney. For the last 15 years, he has been a stay-at-home dad. But that gig is running out. Kids will soon be moving out and moving on.
View all posts by Kit Troyer →
This entry was posted in COURAGE, DUMB SHIT I'VE DONE, HEROES, ICE HOCKEY, MOVIES, MY CHILDHOOD. Bookmark the permalink.

3 Responses to DAVE’S A MESS