The grandparents were in town last weekend.

They always inject some unpredictability into proceedings.

For instance, I wasn’t prepared for the intensity of my 79-year-old mother’s attention to the NFL Draft Combine.

For those unfamiliar with the Combine, it’s a highly ritualized, somewhat absurd showcase for college football players hoping to be drafted into the NFL next year.

Without pads or helmets, the players are put through the paces and tested for speed, strength, size, agility, and skill, under the watchful eye of coaches and general managers.  And it’s all televised.

decent speed for a big man

My 10-year-old son was watching, which didn’t surprise me.  But Grammy Sally didn’t miss a moment, either.

She was a big fan of Jeff Janis, a 6-foot-3 wide receiver from Saginaw Valley State University.  She was impressed he could run the 40-yard dash in 4.42 seconds.  She thought he might look good in a Washington Redskins uniform.

She also liked Oregon running back De’Anthony Thomas.  But it had nothing do with his 40-yard dash.

“I like the apostrophe in the middle of his name,” she said.

Mom had thoughts on other topics, too.

First, she taught us two words.

I guess this adjective derives from the term Bolshevik, and was used, at least in the Midwest in the 1940s and 1950s, to refer to a disobedient or rowdy person, especially a child.

My mom is from Nebraska.  Her friend Judy is from Kansas.

‘Bolshy’ was the word for rule-breaking kids in Kansas when Judy was young.

he looks brave, i guess

This word came up during the Olympics.  One of Team Canada’s hockey players was defenseman Drew Doughty from the Los Angeles Kings.  Mom made a comment about the meaning of his last name.

I thought she was talking about “dowdy,” which means ‘having a dull or uninteresting appearance.’

But she was talking about “doughty,” which means ‘brave, strong and determined.’

(Neither of these words, by the way, is to be confused with ‘doubty,’ a more obscure modifier which means ‘full of doubt.’)

We were discussing the Swedish national hockey team, including Nicklas Backstrom.

Grammy Sally brought up the opinions of her own grandmother, Gaye, who helped raise my mom and aunt after their dad died young.

Apparently Gaye had little use for Swedish people.

“No good words ever came after ‘Swede,'” when Gaye was talking, according to Grammy Sally.

This struck me as odd, since Swedes seem about as unobjectionable as possible.

But I guess Gaye, of Irish descent, found the many Swedish-Americans in Nebraska to be, hmm, I’ll just say, “the strong, silent type.”  She preferred a bit more chatter and poetry in her companions.

Personally, I’ve always liked Swedes.  My favorite hockey player growing up was Bengt Gustafsson.  One of my favorites today is the above-mentioned Backstrom.

Sadly, Backstrom was kicked out of the Olympics on the eve of the gold-medal game against Canada for taking Zyrtec D, an allergy medication which contains pseudephedrine.

So I guess we can add “hopped up” to the stereotypes about Swedes.  (No wonder they beat the Finns in the semifinals!)

riding under the influence?

Incidentally, only a member of the eternally cursed Washington Capitals could play for a silver-medal winning team and come home without a damn medal.  Jesus.

Backstrom didn’t appear altered when he arrived for a game earlier in the tournament with his teammate Marcus Johansson.  They were wearing suits and riding bicycles.  They looked like missionaries.

One can already buy a t-shirt which memorializes the eco-friendly arrival of these two Swedes.

The other time Grammy Sally went off script this weekend was when we pulled up at the ice rink in Valencia for Lulu’s game against the Jr. Flyers Pee Wee A team.

We parked beside a pick-up truck which had a window decal.  It showed a boy in an Uncle Sam outfit urinating on the word, “OBAMA.”

Grammy Sally objected to this sticker, as did my daughter Lulu. 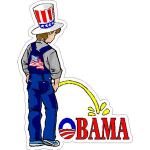 “Some people don’t like the president,” my mom told Lulu, “BECAUSE HE’S BLACK.”

I said there could be other reasons why a voter disliked President Obama, so we shouldn’t automatically assign racism as the motive.

But the two of them didn’t listen.  By the time I exited our minivan, my mom, with her cane in one hand, was using her other hand to try to peel the decal off the pick-up truck.  She was being cheered on by her granddaughter.

The attempted petty theft alarmed me since:  a) it was against the law; b) it was a bad example to set for a girl who is already bolshy herself; and c) it seemed like a good way to start a parking-lot altercation.

In fact, if you do a Venn diagram of ‘pick-up truck drivers,’ ‘youth hockey parents,’ and ‘owners of anti-Obama, urination-themed bumper stickers,’ I am pretty sure the people in the middle are big-time bolshy.

I managed to shoo away Grammy Sally, so we didn’t get the crap kicked out of us.

Then we went inside the rink, where Lulu’s team got the crap kicked out of them.

After the game, Grammy Sally wanted to take a second crack at the Obama sticker, but the truck was gone.

As of today, the grandparents are gone, too.  We are back on script, as a household.  It’s a lot less entertaining.

Kit Troyer lives in Los Angeles. He worked previously as a newspaper reporter and a criminal defense attorney. For the last 15 years, he has been a stay-at-home dad. But that gig is running out. Kids will soon be moving out and moving on.
View all posts by Kit Troyer →
This entry was posted in CHILD REARING, ICE HOCKEY, SAYINGS. Bookmark the permalink.